New Orleans man wrongfully convicted of rape released from prison after 36 years; others could be ne

If you're a male and have been subject to discrimination based on your sex and need help, please contact us today.

Disclaimer: This website compiles information for distribution as a public service. The information distributed does not necessarily reflect the views of the National Coalition For Men Carolinas.The information contained on this website is strictly for informational purposes only and is not intended to represent legal advice.

Top Stories In the News

Appeals court ruling reverses trial judge’s approach When a federal judge dismissed part of a male student’s Title IX lawsuit against his university last fall, she cited the binding precedent of her appeals court. Now that the 6th U.S. Circuit Court of Appeals has changed its precedent, Judge Susan Dlott has revised her ruling in a case against the University of Cincinnati. Plaintiff Tyler Gischel had asked the judge to reconsider her dismissal of his claims for “selective en

When An Accuser Cries Wolf: Repercussions for Making False Allegations of Sexual Assault On College

Earlier this month, a female college student from Long Island, New York, was sentenced to one year in prison for falsely reporting to the police that she was sexually assaulted by two male students at Sacred Heart University in Connecticut. According to the student, two football players raped her in 2016 at an off-campus party. When interviewed by the police for a second time, two months after her initial report, the student admitted that the sexual encounter she previously d

Instructor is ‘confirmed sexist and bigot,’ according to Title IX request A University of Michigan-Flint professor is calling for a Title IX investigation at Northeastern University in response to a column by one of the school’s professors that openly advocated hatred against men. Mark Perry, a professor of economics and finance at University of Michigan-Flint, submitted a request earlier this month to Northeastern’s Title IX department staff in response to sociology Professo 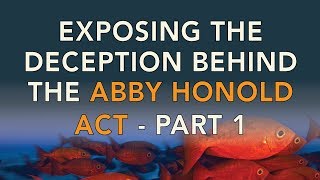 Exposing the Deception Behind the Abby Honold Act - Part 1

The Abby Honold Act is a bill getting slipped in with the VAWA Reauthorization due this year in the United States. These videos discuss deception behind this bill and the implications if it were to be passed.

The U.S. Department of Education has agreed to investigate claims that the University of Texas at Austin's Title IX office discriminated against a male student based on his gender in its handling of harassment claims. The student alleges that administrators found him guilty of two out of six charges on "very questionable grounds," then dismissed his counter-complaints against his accuser based solely on his gender. The U.S. Department of Education has launched an investigatio

But it says no to paying for students’ lawyers The interim Title IX guidance released by Education Secretary Betsy DeVos last fall was far less prescriptive than the guidance that colleges followed for the previous six years. Even before DeVos’s department finishes the notice-and-comment regulatory rulemaking that her Obama administration predecessors ignored, the University of Kentucky has already made changes that strengthen fairness in its own Title IX investigations. The

Founder of anti-rape group, whose claims were found ‘implausible,’ scores a win against UNC

Pyrrhic victory for activist whose claims resembled those of ‘Jackie’ Her 2013 Title IX complaint against the University of North Carolina made Andrea Pino a celebrity in anti-rape activist circles. She went on to co-found End Rape on Campus, star in The Hunting Ground and write a book that urges people to believe any and every rape claim without scrutiny. Five years after that complaint, which “touched off a wave of similar actions by women against universities across the na

‘Structural error … permeated the entire disciplinary process’ California State University-Chico did not give a graduate student a chance to defend himself in the course of a lengthy Title IX proceeding, a state judge ruled, overturning his expulsion. “John Doe” was barely alerted to the evidence against him before he was found responsible for sexually assaulting an undergraduate female, Los Angeles Superior Court Judge James Chalfant said. Not only did the public university

Texas A&M University swimmer filed a lawsuit against the school on Monday, claiming that he was wrongly held responsible and disciplined by a Title IX investigation in 2015. According to the lawsuit, Austin Van Overdam was found responsible for the alleged sexual assault of female TAMU student Hannah Shaw, whom he met on the social media dating app, Tinder. After exchanging several messages on the platform, both students agreed to meet up in person—an encounter that led to th

Woman who lied about rape at Michigan college sentenced to jail

A woman who lied about being raped in a Michigan college parking lot was sentenced to 45 days in jail. Mary Zolkowski, 21, pleaded guilty to falsely reporting a felony in March. Zolkowski said she told her mother she had been raped in February by a stranger in the parking lot of Delta College southwest of Bay City, Michigan. She said her mother called the campus, and then Zolkowski completed a report. Delta College police were unable to verify her story, and Zolkowski later a
1
23